Unlike plant-based eggs developed by Eat Just​​, Zero Egg, Spero Foods, Nabati Foods, Evo Foods and others, EVERY EggWhite features ‘real’ egg proteins made without chickens (the proteins are produced in fermentation tanks by genetically engineered microbes), delivering functional properties The EVERY Co claims are extremely tough to replicate with plant proteins.

So how close is EVERY EggWhite - the third commercial product to emerge from The EVERY Co’s precision fermentation platform - to regular egg white, which contains scores of proteins from ovalbumin and ovotransferrin, to ovomucoid, ovomucin, and lysozyme?

The company is not disclosing EVERY EggWhite’s composition right now, but founder and CEO Arturo Elizondo confirmed that it contains a combination of egg proteins including albumin (the most prevalent protein in egg white) which deliver the key functional properties (aeration, whipping, gelling, binding, foam stability) formulators are looking for, giving it a distinct advantage over plant-based eggs in applications such as baked goods.

“EVERY EggWhite tastes, whips and gels like a chicken-derived egg white to provide the same height, foam stability, aeration, and texture needed for baking, and can be used in applications that span the gamut from cakes, cookies and breads to protein bars, plant-based meats and pastas.”​

‘Our core focus over the last five years is getting the yields really high enough such that with scale, you can meaningfully compete’

The EVERY Company,​​ which has been mining the egg proteome for “​novel, hyperfunctional proteins” ​​it can express in yeast or other organisms - has already commercialized two ingredients exclusively sold by Ingredion and available globally: an animal-free pepsin​​, an enzyme traditionally sourced from pig stomachs; and a highly soluble, ‘nearly invisible’ protein called EVERY ClearEgg​​​, which is bio-identical to a glycoprotein found in egg white.

Understanding that scale is mission critical if precision fermentation companies are to make any inroads in the marketplace, The EVERY Co is working with two of the world's largest food companies, noted Elizondo, who noted that Ingredion handles global sales for its proteins, while AB InBev is helping it develop an industrial scale fermentation platform for its proteins (which are currently manufactured by toll processors).

“Our core focus over the last five years has been getting the yields really high enough such that with scale, you can meaningfully compete and get to competitive price points and ultimately undercut the animal protein market,”​ he told FoodNavigator-USA.

“Right now, we're in the hundreds of thousands of liters of fermentation capacity, but part of what we're working with AB InBev on is unlocking the multi-million liter capacity that will ultimately allow us to compete head-to-head with animal products.​

“It'll be a few years until we can undercut the market, but that is very much where we're headed.”​

What’s the attraction of ‘animal-free’ egg white for food companies?

As to why food brands are interested in animal-free egg whites, it all depends on the company, he explained.

Some large CPG brands are seeking to replace animal ingredients to reduce their environmental impact, while others are just fed up with market volatility associated with eggs, where prices can yo yo every time there’s an Avian flu outbreak, he observed. While plant-based alternatives can work in many foods, they don’t have the functional properties of egg white, and will not deliver in certain applications, particularly in baked goods, he said.

Challenger brands, meanwhile, might be more interested in EVERY EggWhite’s vegan credentials, or wanting to be at the cutting edge, although big food brands are increasingly trying to lead, rather than follow, when it comes to the emerging ‘animal-free’ space, he said (an area that now spans everything from collagen protein to whey and casein made from microbes).

“It’s honestly been amazing to see the transformation of the big CPG world, where before they’d have these two-year sales cycles, they don't move quickly,​” said Elizondo, who founded The EVERY Co (formerly known as Clara Foods) in 2014. “Quite frankly, I'm seeing the complete opposite now. ​

“Now they are setting up innovation teams to capture new technologies and launch products quickly. A big part of it I think has been that they don't want to be left behind, because smaller companies  have been taking market share from incumbents. I don’t think there’s ever been a better time to be an ingredients company.”​

He added: “We’re seeing interest across the board, a lot in baked goods, but also in meat alternatives for binding and gelation, and also in protein bars, scrambles, frittatas and so on.”​ 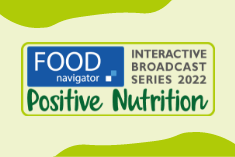 Starch is relied on for thickening, water-holding or moisture control, texture, and mouthfeel, so replacing it can be a challenge.