The Act​​ ​– which came into effect in November 2020 and was backed by the Oklahoma Cattlemen’s Association and the Oklahoma Pork Council - permits brands such as Tofurky (also a plaintiff in the lawsuit) to use ‘meaty’ terms such as ‘beef,’ and ‘pork on their labels with appropriate qualifiers such as ‘vegan’ or ‘plant-based.’

However, the small print stipulates that this qualifying language must be “in type that is uniform in size and prominence to the name of the product.”​​ Penalties for not complying include fines up to $10,000 per offense and one year in jail.

While this might seem fairly innocuous, says the PBFA, the reality is that for most brands, the name of the product is typically in much larger type than any accompanying descriptors such as ‘vegan,’ or ‘plant-based,’ and compliance would require brands such as Tofurky to “fundamentally redesign each product label and corresponding marketing materials​.

“Plant-based meat producers across the country… would be forced to spend millions of dollars to develop Oklahoma-specific labels or abandon the Oklahoma market altogether; lose the ability to freely, flexibly, and truthfully label their products; and they may still run afoul of the Act,” ​according to the latest lawsuit filed by the PBFA vs Oklahoma governor Kevin Stitt and commissioner of agriculture, Blayne Arthur.

“By attempting to impose burdensome roadblocks on a burgeoning industry, the State of Oklahoma has bowed to pressure from cattle industry lobbyists… ​

"The lawmakers** who sponsored the Act were members of the Oklahoma Cattlemen’s Association and stood to gain from the Act, being beef producers… and publicly acknowledged that they are ‘always willing to help our beef producers’.”​

Tofurky: ‘This is a nakedly protectionist attempt to shore up animal agriculture industries​’​

Given that consumers are buying plant-based meat products – which often come with a premium price tag – precisely because they are not​​ derived from animals, it’s hardly in PBFA members’ interests to conceal their true nature, noted Jaime Athos, CEO at PBFA member Tofurky.

“​This Oklahoma law is ultimately not about protecting consumers,” ​claimed Athos, who uses the term ‘plant-based’ prominently on all of his products​ ​to spell out that they are not made from slaughtered animals.

“It’s about limiting their choices in a nakedly protectionist attempt to shore up animal agriculture industries. ​

“Plant-based consumers are some of the most well-informed and thoughtful about their food choices and it is insulting to assert — without any evidence I might add — that they are choosing plant-based products over and over at store shelves because they have been deceived.​”​

The lawsuit is the second filed by the PBFA challenging the Oklahoma law.

The first complaint​​, supported by the Institute for Justice and filed in September 2020, argued that the law violated the 1st​ and 14th​ Amendments, an argument given short shrift by Judge Stephen Friot, who concluded that the labeling clauses in the law were both “justified and not unduly burdensome.”​

The latest lawsuit* (filed this week by the Animal Legal Defense Fund), makes a different set of legal arguments, challenging the Oklahoma law under the dormant Commerce Clause, the Due Process Clause, and the Supremacy Clause of the Constitution, explained ALDF senior staff attorney Amanda Howell: “This is a very different lawsuit, a different cause of action, and we’re pretty confident that the analysis will be different.”​

According to the complaint, the Oklahoma act “institutes a protectionist trade barrier that contravenes and is preempted by federal law​ [which it says already requires that labeling be truthful and not misleading].”​

It also “imposes vague standards” ​that “go beyond federal law and create a patchwork of requirements making the sale of plant-based products impracticable or impossible on a nationwide basis,” ​argues the complaint.

Enforcement: ‘My bet is that they are taking a wait-and-see approach’​

So has there been any enforcement action to date, given that the Meat Consumer Protection Act came into force last November?

Not yet, said Howell, but that is likely a reflection of the fact that the state anticipated further legal challenges: “It doesn't really serve the state to bring enforcement action if this law is stricken as unconstitutional, so my bet is that they are taking a wait-and-see approach to see how this challenge goes before bringing any enforcement action.”​

FoodNavigator-USA has contacted Blayne Arthur, Governor Kevin Stitt,  the Oklahoma Cattlemen’s Association and the Oklahoma Pork Council for comment and will update this article should it receive any comments.

The scope of meat and dairy labeling bills that have been introduced in multiple states in the past few years varies, with some attempting to prohibit the use of terms such as ‘meat’ and ‘milk’ on plant-based products, even if they use qualifiers such as ‘dairy-free’ or ‘plant-based;’ and others extending that prohibition to terms such as ‘burgers.' Some, such as the Oklahoma law, allow ‘meaty’ terms, but then attempt to regulate the size and prominence of qualifiers such as ‘vegan’ or ‘plant-based’ on food labels.

The plant-based industry has had mixed success challenging such laws, which supporters insist are vital to avoid consumer confusion, and opponents claim are a 'solution in search of a problem,' but there have been some notable wins for the plant-based lobby in the past couple of years, with judges challenging the notion that shoppers are being misled.  Read more HERE​ ​

The plaintiffs request that the court declare the Act unconstitutional and grant a permanent injunction preventing its enforcement.

** According to the lawsuit, Representative Toni Hasenbeck’s family is involved in beef production in the Elgin are​​a

The Oklahoma Meat Consumer Protection Act​​,​​ which came into effect in November 2020, was introduced by Oklahoma State Senator Micheal Bergstrom in conjunction with the Oklahoma Cattlemen’s Association.

In a press release welcoming the Act – signed into law in May 2020 – Bergstrom said: “Clever marketing practices and deceptive labeling on plant-based meat alternatives can be confusing for shoppers looking to purchase meat-based items at the grocery store. ​​

"HB 3806 ensures that clarity and accuracy of labeling meat and plant-based food items, giving consumers peace of mind that they are purchasing exactly what they intended.” ​​ ​ 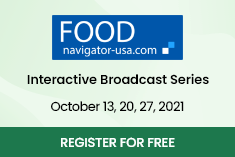