It has long been anticipated that rapidly growing and financially strong Chinese companies would start to make large-scale acquisitions in order to access international food markets. Shuanghui Group, however, has purchased Smithfield for a very different reason - to better supply rising demand for processed meat in its domestic market.

Subject to regulatory approval, Shuanghui’s offer of US$7.1 billion for Smithfield will see the company’s global retail revenues boosted by over 30% and add an array of strong international brands to the company’s current portfolio. The successful integration of these assets could see Shuanghui Group rise to the top of the global chilled processed food market in the near term. 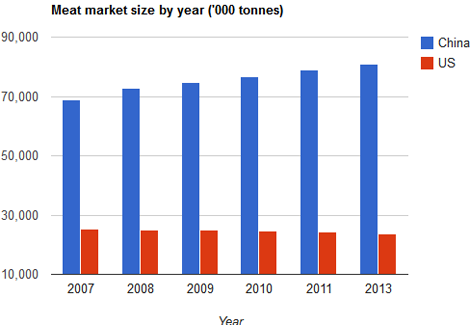 Smithfield’s brand portfolio is one of its key strengths, with assets including its eponymous brand, as well as the Aoste and Jean Caby labels. However, the company’s heavy reliance on more mature meat markets such as the US and France caused its retail revenues to register a CAGR decline of 3% over the 2008-2012 period.

Breaking into markets with low but rising meat consumption has been a key objective for many of the larger manufacturers of meat products. In 2012, per capita consumption of chilled meat in China was less than 2kg per year, compared to nearly 17kg in the US, indicating both that the US market is already mature and that the Chinese market has a long way to go.

The growing appetite for meat in China is largely expected to be driven by rising disposable incomes, particularly in urban areas, which will shift consumption away from staples towards meat products. However, Chinese confidence in food safety is at an all-time low. The latest in a series of food safety scandals occurred in March 2013 when over 9,000 putrid pig carcasses were found floating in the Huangpu river near Shanghai.

By acquiring an American company and its brands, Shuanghui will hope to introduce ‘safer’ products to the Chinese market and capitalise on the situation by charging a premium for them. 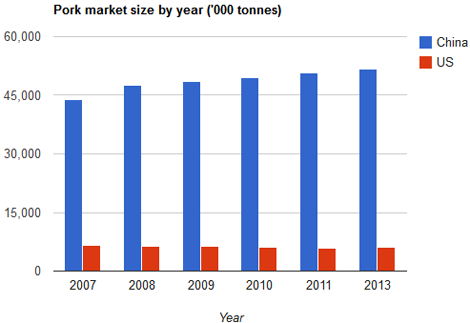 As the largest chilled processed meat manufacturer in China, Shuanghui dominated the market in 2012 with a 13% value share, trading under its eponymous Shuanghui brand. Competition from international players is currently low, with only the US-based Hormel Foods ranking in the top five.

Shuanghui’s established nationwide distribution network and Smithfield’s American brand portfolio is potentially a lucrative combination. If Shuanghui can successfully integrate Smithfield’s brands and introduce them to the Chinese market then it is likely that the company’s domestic market share will rise.

Given the double-digit growth expected over the next five years in chilled processed meat in China, Shuanghui Group is likely to become a global category leader in the short term. Globally, Kraft Foods Group’s Oscar Mayer and Nestlé’s Herta are the current leading brands, although both are suffering from the same affliction as Smithfield - a strong reliance on mature markets.

It is possible that both Kraft and Nestlé could introduce their flagship brands to the Chinese market, but would it be enough to challenge a dominant Shuanghui?