The San Leandro-based startup – which was founded in 2015 by academics* at Caltech and Harvard in 2015, when it was known as Synvitrobio – is one of a new wave of synthetic biology companies expressing proteins using some of the bio-machinery found inside the cells of microbes such as E. Coli​, without having to keep the cells alive, hence the term ‘cell-free.’

This allows firms to produce ingredients that are currently difficult or impossible to make inside, say, a yeast or bacteria cell, and dramatically speed up the discovery process, claims Tierra, which has just launched the Tierra Protein Platform​​, an online portal enabling customers to get custom proteins “synthesized, validated, and shipped to them in just a few clicks.”  ​

Custom protein... made to order​

Customers enter digital protein sequences ("strings of amino acid letters"​) into Tierra’s online portal, which then assesses their properties and the most efficient ways to biosynthesize them, explained co-founder and CSO Dr Zachary Sun.

From there, the company uses a cell-free manufacturing process to express the final proteins, which are then shipped to customers for testing, he told FoodNavigator-USA.

Partners such as San Diego based Debut Biotech​ ​have since used these proteins (in Debut’s case, enzymes) to optimize their own cell-free based biomanufacturing platforms (Debut uses immobilized enzymes to convert low-value materials such as glucose into high-value ingredients such as colors and flavors, in a continuous​ process).

But why ditch the cell?

It all depends on what proteins you want to produce, said Sun, who noted that traditional microbial fermentation systems use a batch (rather than continuous) production process, and can have low yields and high costs, as target ingredients are either secreted into the tank, so require subsequent purification, or are locked within cells, requiring an extraction process, for example.

Ditch the cell, but keep some of its internal machinery, and you can operate across a wider range of conditions (pH, temperature etc) and enable metabolic transformations that are not possible in cellular microbial fermentation systems, he claimed.

“Cells can offer distinct advantages when you are trying to make a lot of protein of one specific type, but the fundamental realization we had at Tierra, was that before you get to that point, there’s all that R&D work beforehand to try to identify the protein you want to make and how you want to make it; it's all about trying things out and understanding what your best candidate is, and for that, cell-free approaches offer advantages, because you don't have to fight biology to get that protein out.​

“So what we have is effectively a liquid that you can put synthetic DNA in, which is a type of protein you want to make, and you're not limited by toxicity or things that the cell needs to grow, which allows you to really quickly get protein in small amounts, so you can propel innovation.”​

The E Coli ​strains Tierra uses are “no different than those used in traditional fermentation,” ​stressed CEO Dr Corinna Chen. “The fundamental difference is that in fermentation, the cell is alive and bound, while in cell free, we're using the molecules and compounds inherent in the cell, we just don't need the cell to actually be alive.”​

As a practical example, she said, take something like the red food color cochineal (crushed insects). Food companies love the stability and vivid red color, but they don’t want to put bugs in their smoothies, so they are exploring ways to biosynthesize red colors with similar properties, without the unfriendly label. Cell-free approaches can help them get there.

“So companies know what that red is,” said ​Chen. “So they can input a bunch of variants or sequences into our platform, so they might want more pH stability or temperature stability depending on the application they are targeting, so we can crank out those variants for them. If they did that​ [in-house] it could take years. There's a huge advantage in being able to help people innovate quicker and being able to find that needle in the haystack sooner.”​

So what is the business model at Tierra, which has thus far raised just over $6m in seed funding and is currently building up to a series A?

“But we have plans to grow with our customers and their needs, so that while now we may just provide insight, in future, we might provide greater quantities, and potentially a path to manufacturing. One of the advantages of cell-free​ [biosynthesis] is that it should be far easier to tech transfer from R&D scale to commercial scale. ​

“Customers can already go to our e-commerce site and order proteins and we've already booked commercial revenue and worked with several companies, from synthetic biology startups in food and flavors, to very large companies.”​

Microbial fermentation may be the best option for biosynthesizing many proteins, while cell-free production could be more efficient for others, she said. “There are certain compounds that are made more easily and readily by microbes and others that are not​.

“But it​ [microbial fermentation] uses a lot of water and you need a lot of space in the bioreactors on a commercial scale,” ​added Chen. “Whereas that’s not the case in a cell-free system, for example.”​

Asked about the broader potential of cell-free biomanufacturing in food and beverage, Synthesis Capital co-founder Dr David Welch (who was previously director of science and technology at The Good Food Institute), told us he saw a lot of opportunity in the alternative protein arena.

“In particular, the flexibility of cell-free platforms allows the synthesis and manufacture of a broader range of proteins, some that may be more technically or economically challenging to produce via conventional microbial fermentation. ​

“Secondly, once at scale these platforms could reduce the manufacturing footprint and complexity required for recombinant protein production, which will become more and more important as the demand for these ingredients increases.”​ 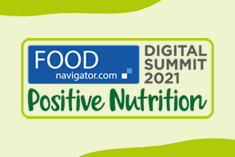 The FoodNavigator Positive Nutrition Digital Summit will focus on eight strategic pillars that will be crucial to delivering positive nutrition strategies.

How do we meet growing food demands more efficiently and sustainably? Join Muddy Boots by TELUS Agriculture to explore how data insights and digital solutions...

Adopting a flexitarian lifestyle is more accessible today than ever, thanks to the rapid rate of product development for plant-based meat options. To help...

Learn how the plant-based movement continues to inspire an evolution in consumer eating habits, and how ADM’s NutriStem™ ingredients with their vertically...

Consumers view sustainability more holistically than ever and see it as a moral imperative for companies to take action to protect environmental and social...