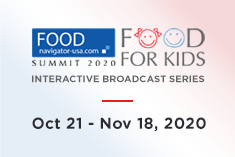 This year’s FoodNavigator-USA Food for Kids Summit is transitioning from our usual face-to-face event to an interactive broadcast series.

Bacillus coagulans SNZ 1969TM is an exceptional probiotic strain due to its stability, 50-year history of use and efficacy supported by twenty plus publications.

Withania somnifera (Ashwagandha) is one of the few herbs with significant effects on both psychological and physiological aspects of human functioning.